Testimonials linked to my translation and interpreting work: 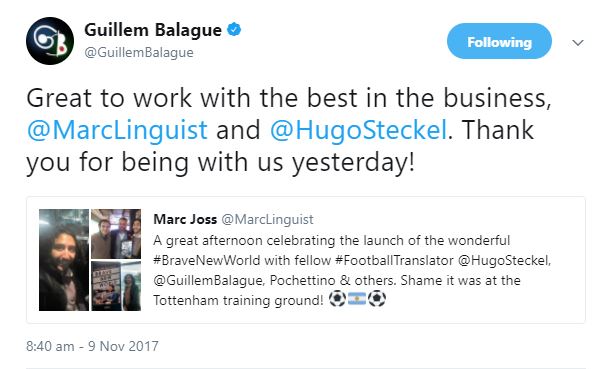 THE LAST TRIBE - Feature-length documentary subtitling from English to French
I was put in touch with Marc to subtitle a 70-minute documentary from English to French. The translation was not only faithful to the original material, maintaining the emotional sentiment and humorous appeal of the interviews that made up the film, but also added a creative, charming and witty interpretation of the subject matter, retaining great depth to the context and characters within the film. The feedback from French audiences further clarified how accurate the translation was. I will definitely be calling Marc for the next project!
Simon Glass

Marc Joss is an excellent and highly competent translator. He worked to tight deadlines translating from Spanish to English (and vice versa) on an official football club history, and I would not hesitate in recommending his services.

Marc's excellent knowledge of football and Spanish enabled him to efficiently translate several chapters of my Messi book into English and he coped admirably with the tight deadlines. I would fully recommend him as a translator and proofreader.

Marc Joss works for Clark Football Languages Ltd. as a Portuguese, Spanish, Italian and French football translator. Marc has a very good understanding of football, which is crucial in this line of work.

Marc is one of my core team of football translators in and around London and I am very happy with him in the team.